Girl Meets World: Of Terror 2 is the eighteenth episode in season 2 of Girl Meets World and the 39th episode overall. It aired on October 2, 2015, as a part of Disney Channel's Spooktacular weekend to 2.4 million viewers.

Riley and Maya discover a mysterious resident living in the bay window of Riley's bedroom: a flapper from the 1920s who loves singing and dancing.

This Halloween episode again features Auggie breaking the fourth wall as host, this time with Doy assisting as co-host; Auggie is dressed as the Scarecrow from the Wizard of Oz while Doy is dressed as the "Cowar-doy Lion". Auggie welcomes the audience to another episode of "Scary Time Theater", but Doy prefers the show be titled "Doy Story". Auggie announces they're expecting one more person from the Land of Oz when there's a knock at the front door, which Topanga opens to find Ava dressed as the Good Witch of the North, which Topanga is not fooled by; Ava asks Topanga where her broom is right before she closes the door. Immediately there is another knock at the door which Topanga again answers; this time it's Ava dressed as the Wicked Witch of the West. Auggie, again addressing the audience, reveals their first tale of the evening is about the Bay Window in Riley's room...

First Story (The Ghost of the Bay Window):

When Maya asks Riley why they're dressed as Roaring 20s-style "flappers", Riley explains that while lying in bed the night before wondering what they would dress as for Halloween, she heard a voice saying "You should be flappers" or "jazz babies"; Maya suddenly hears the same voice and begins to freak out when a ghost materializes in front of both of them. Unaware, Riley wants to give the new girl a hug, but Maya tells her that she's a ghost who has been dead nearly a hundred years. Identifying herself as the Bay Window Ghost, she suggests they go ahead and get their screams out of their system so they can be chums, but Riley can't bring herself to scream; the Ghost then disconnects her head from her shoulders saying "How about now?", causing Riley and Maya to both let out a scream, and the three quickly become friends.

The Ghost reveals that she has been watching the girls' antics in the Bay Window since they were very young, but Riley and Maya don't believe her until the Ghost does impersonations of both of them in their youth, repeating some of the things they both said there during their childhood. The Ghost then tells how she used to live in the house, how Riley's bedroom was once hers, and how she planned her own schemes and capers there. She promised herself that she would remain there until someone else realized how wonderful it was to sit in the bay window to laugh, cry and dance. Knowing that that's what they both do, Riley and Maya nervously tell the Ghost she's now free to go, but she can't leave just yet because she hasn't seen them dance. Using her powers, she makes Riley jump up and awkwardly dance the Charleston, a very popular dance during the 1920s. Maya says it'll take more than that to make her get up and dance, but the undaunted ghost begins controlling Maya, making her dance and sing a chorus of the Tin Pan Alley standard "Hot Feet". The ghost then pulls Auggie, Eva and Doy into Riley's room to dance and sing a reprise of the song. Similar to when Topanga first met him, the Ghost asks Doy about his name, ignoring Auggie's warning to just go along with it. When she corrects him, Doy again lets out an ear-splitting scream which causes the Ghost to disappear.

Auggie, Ava and Doy again address the audience introducing the second story, one that takes place in another haunted house besides their own. Cory and Topanga spar over which one will go with Auggie and his friends trick-or-treating and who will go with Riley and Maya to the haunted house. Topanga volunteers herself to go with the kids, but changes her mind when Doy screams again.

At the haunted house, Riley and Maya are a little embarrassed to have Topanga along as she appears to be the only grown-up around (except for a security guard named Larry), but Topanga is certain that after Riley and Maya go in the haunted house they will quickly come out screaming and running for their lives; at that moment, Cory, Auggie, Ava and Doy are all just walking out of the haunted house laughing. Cory tries to reassure Topanga that the girls will be fine on their own, but Topanga is not yet convinced. Maya stops two other thrillseekers, who turn out to be Austin Moon and Ally Dawson (dressed as a slice of bacon and a tomato, respectively) and asks them to persuade Topanga that there's nothing to worry about. Outnumbered, Topanga relents and goes with Cory and the kids leaving Riley and Maya there.

After they leave, Larry the guard morphs into the Bay Window Ghost, causing both Riley and Maya to scream again. Austin doesn't believe she is an actual ghost until she changes Austin and Ally's costumes into Roaring 20s formal wear. The Ghost wants Riley and Maya to take her home as she is scared; she explains that the house is actually haunted, and that Tessie, the ghost who lives there, is her best friend. During the Roaring 20s the house was a lively party place, but was eventually abandoned and had long since fallen into disrepair. Tessie had become deeply despondent because nobody used the bay window in her house like Riley and Maya use the bay window in theirs.

Maya asks if there is anything they can do to help, and the Ghost, knowing that Tessie could never resist the urge to dance, casts another spell causing Riley and Maya to again dance and sing another chorus of "Hot Feet", this time with Austin and Ally joining in, but it doesn't work, and the Ghost becomes concerned as it is out of character for Tessie.

Austin reasons that perhaps Tessie's choosing to not come out is her way of inviting them in, so the four of them, against the Ghost's advice, sing "Hot Feet" once again as they dance their way into the house, but a loud menacing growl from within sends all the others inside running for their lives. Austin and Ally quickly excuse themselves, but not before the Ghost changes them back into their bacon and tomato costumes. Riley and Maya are the last ones to come out of the house; visibly shaken, the two abruptly make their way home.

Cory, Topanga and the kids are all back home from trick-or-treating, and Ava makes Auggie and Doy empty out their Halloween buckets on the coffee table so they can pool the candy and split it up among them, but Ava instead dumps all of their candy into her own bucket. As Riley and Maya return home, Ava has a sugar crash and falls asleep on the couch. Doy, holding up his empty bucket, trick-or-treats Riley and Maya, but when Riley says they have no candy, Doy decides to "trick" them by casting a spell over them, which they both pretend to be affected by as they make their way back to Riley's bedroom. Once they are seated in the bay window, they both agree that kids like Doy and Auggie have nothing in their heads except cartoons, and then suddenly Riley and Maya are transformed into miniature Claymation-style caricatures of themselves. After reveling in their animated state for a few moments, the girls both realize that it's the Bay Window Ghost who transformed them. After they change back into their actual selves, the Ghost reappears holding a suitcase. Repeating her earlier words, she promised herself she wouldn't leave the bay window until she found someone else who appreciated it as much as she did. Confident that the bay window is in good hands, the Ghost is now ready to leave, planning to move into Tessie's house to keep her company. Before leaving, Riley and Maya both ask whether or not their bay window will continue to have power after she's gone; the Ghost replies that she is no longer the magic of the bay window, but the two of them are. She then fades away as she leaves the Bay Window for the final time.

At the end of the episode, Riley, Maya, Auggie and the kids, surrounded by numerous empty candy wrappers, are all asleep on the living room couch when Cory and Topanga come in. Wondering what they should do now, the two start for what's left of the candy, but Topanga grabs most of it and heads toward the bedroom leaving Cory to put everyone else to bed. 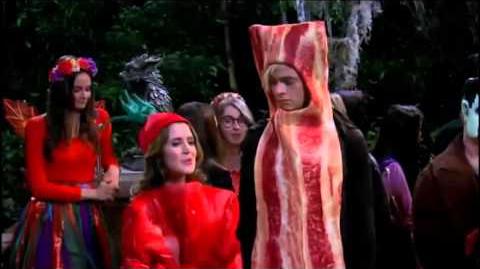 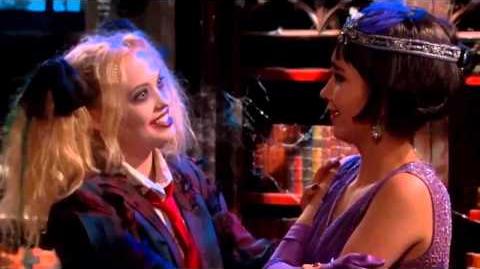 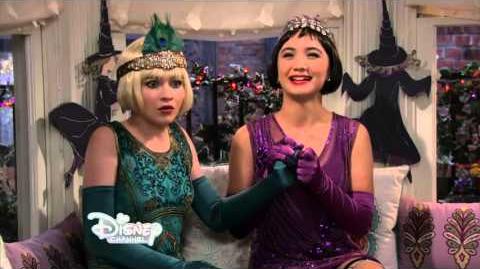 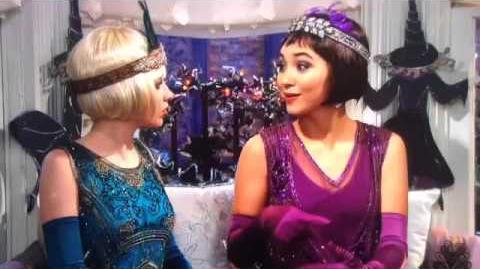